The Android operating system comes in eight main versions since 2008, as of the end of 2017,  plus each version is often customised by the handset vendor. With each version comes increased functionality and options. The issue that we have found is support for these operating system from device manufacturers forcing device refresh to stay secure and compliant.

For security compliance devices should be kept up to date. Now if you have a recent Google device like a Nexus these do get patched as needed but there are still Nexus models that drop of support and don’t get the latest OS.

We had a customer who used what was a good inexpensive handset a few years back - the Motorola G2 . This was updated at the time to Android 5.0 and then 5.1 but never got any of the essential patches. About a year after Android 6 came out it was updated to the base 6.0.0 but since has had no patches as these come from the manufacturer not Google. There has been no update to Android 7 or 8.

Android devices can be controlled in the Enterprise using the likes of Microsoft Intune  but don’t assume that they support any devices. Always check as even some with the latest OS are not supported. 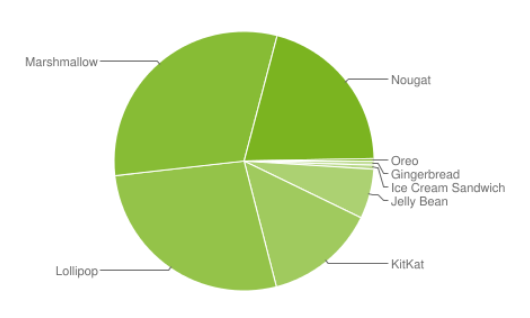 Android themselves keeps track on operating system usage on the internet for developers along with screen sizes and densities.  Other sites provide an alternate view.

The most popular is version 6 called Marshmallow with thankfully few of the now unsupported versions in use.

Apple has a similar issue but not so much as they control the operating system an devices.

Microsoft Intune only supports the most recent versions of IOS. It will give a notice period so in October 2017 when IOS 11  was released Microsoft announced end of support for IOS 8.